Your unit can operate in one of three different “modes” that determines how it behaves: 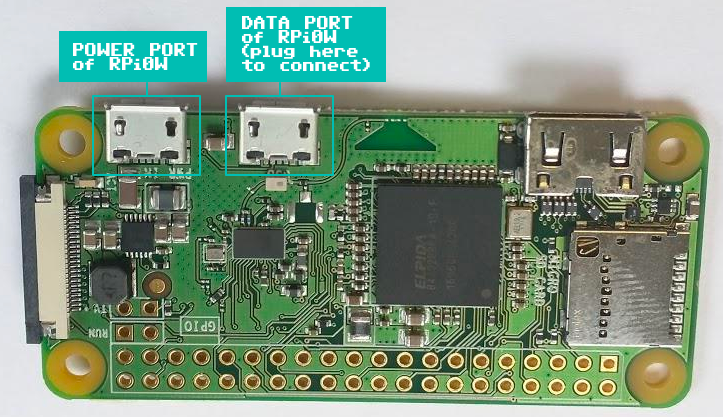 If connected to the USB data port of your computer (or a tablet, phone, etc), your Pwnagotchi will start in MANUAL mode. This means it will read the log of the last session and report a few statistics on the screen. This is the mode you should be using your unit when you want to transfer data from/to it. Moreover, in MANU mode, you’ll be able to access bettercap’s web UI from your computer by pointing your browser to http://pwnagotchi.local.

You can "force" the unit to always go in AUTO mode regardless of which USB port you're using by creating the /root/.pwnagotchi-auto file.

If AI is enabled in your configuration (as it is by default), AUTO mode will transition to AI mode after a few minutes (on average, about 10-15 minutes on a Rpi0W with a decent quality SD card). This interval is required to load all the dependencies the AI module will be using and initialize the neural network. You can think about this as your Pwnagotchi waking up :D Once the dependencies are loaded and so the /root/brain.nn file, AI mode will pick the optimal set of parameters in real time, depending on how long it’s been trained on the specific type of WiFi environment it’s observing now.

Moreover, depending on the laziness configuration parameter, it will more or less frequently start to learn continuously for a given amount of time. While this is happening and the AI is “training”, the algorithm tends to explore wider ranges of parameters in order to determine how those changes affect the reward. While during simple inference epochs (when the unit is not learning but just picking the parameters using previous knowledge), the AI tends to be more conservative and only use parameters in smaller ranges that are known to work in that situation.

Ideally, the laziness value should be very low at the beginning (say 0.1) and you should manually increase over time in order to reduce the amount of training vs inference epochs.

Pwnagotchi’s face—otherwise known as the UI—is available at a dedicated web interface located at http://pwnagotchi.local:8080/ if you’ve already connected to the unit via usb0 (by using the RPi0W’s data port) and set a static address on the network interface (see the ui.web section config.toml). You can think of this as a Pwnagotchi in “headless” mode.

If you’ve properly attached the optional supported e-ink display to your Pwnagotchi’s body and successfully configured it to use that display, you will also be able to see Pwnagotchi’s UI displayed on that screen.

Anatomy of a Pwnagotchi face 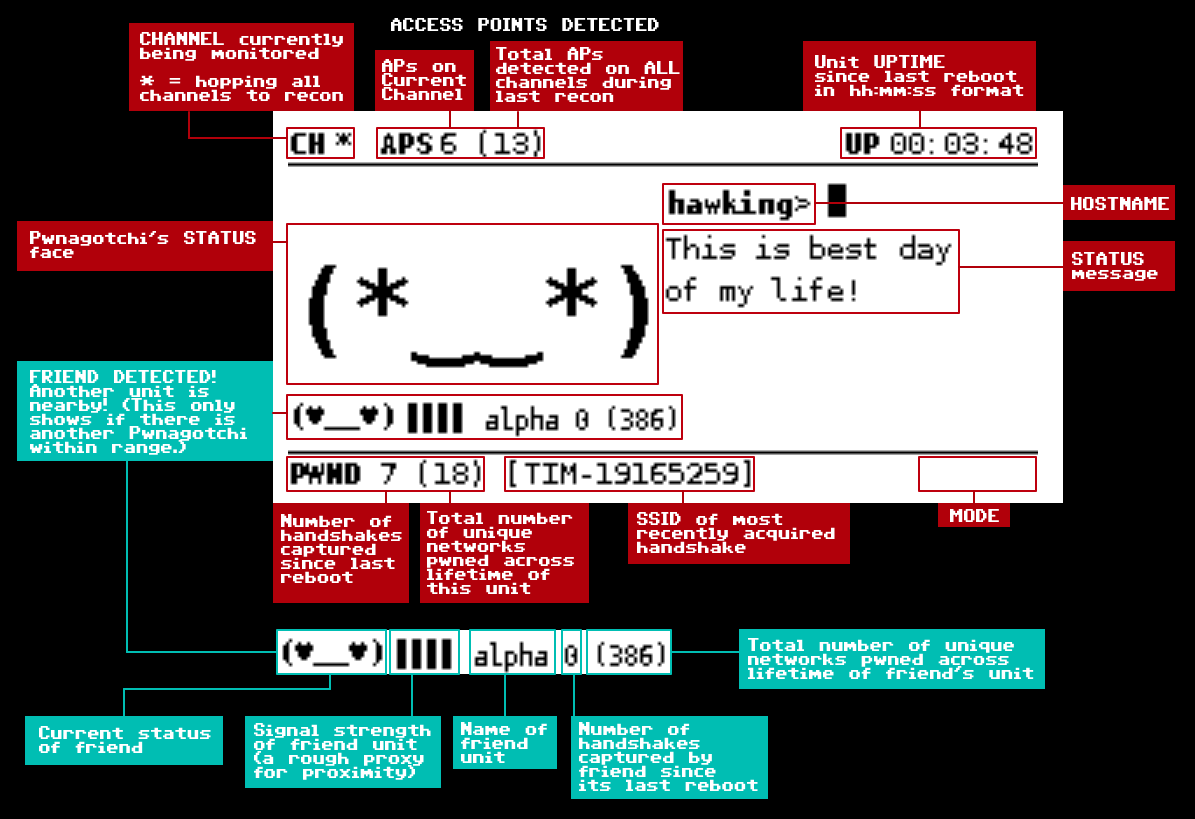 An important note about the AI: a network trained with a specific WiFi interface will ONLY work with another interface if it supports the exact same WiFi channels of the first one. For instance, you CANNOT use a neural network trained on a Raspberry Pi Zero W (which only supports 2.4GHz channels) with a 5GHz antenna; you will need to train one from scratch for those channels to be included. This means that if you swap out your SD card or neural network from, say, a RPi0W body into a RPi4 body, the neural network will NOT work.

At its core Pwnagotchi is a very simple creature: we could summarize its main algorithm as:

Despite its simplicity, this logic is controlled by several parameters that regulate the wait times, the timeouts, on which channels to hop, and so on.

There is no optimal set of parameters for every situation: when the unit is moving (during a walk for instance) smaller timeouts and RSSI thresholds might be preferred in order to quickly remove routers that are not in range anymore, while when stationary in high density areas (like an office) other parameters might be better. The role of the AI is to observe what’s going on at the WiFi level, and adjust those parameters in order to maximize the cumulative reward of that loop / epoch.

After each iteration of the main loop (an epoch), the reward, a score that represents how well the parameters performed, is computed as (an excerpt from pwnagotchi/ai/reward.py):

By maximizing this reward value, the AI learns over time to find the set of parameters that better perform with the current environmental conditions.

Files to know on your Pwnagotchi

You probably don’t know yet, but Pwnagotchi is also a “crypto-pager”! By using the PwnGRID API (and internet connectivity of course), your unit is able to exchange end to end encrypted messages with other units enrolled in the grid. Each message is encrypted on your Raspberry with the recipient RSA public key before being sent, therefore we only have access to encrypted data and we have absolutely no way to see the cleartext as it can only be done by the original recipient via his private key.

Your PwnMAIL address is your unit’s cryptographic fingerprint (which is the SHA256 checksum of its public key in PEM format), you can read it from your unit’s filesystem at /etc/pwnagotchi/fingerprint or by running sudo pwngrid -whoami. You can also use this address to open (and share) your “pwnfile”.

Each unit corresponds to a single cryptographically signed and hardware isolated address.

To check your PwnMAIL inbox, you’ll need to SSH into your unit and then use the pwngrid binary:

You can also check your webUI, there is a tab there just for checking your inbox

To fetch a message given its id (123 in this example), verify the sender signature and decryp it:

This will automatically mark the message as read, to mark it back as unread:

Whenever Pwnagotchi is pwning, it is being powered by bettercap! Conveniently, this means your Pwnagotchi can double as a portable WiFi penetration testing station when you access bettercap’s web UI at http://pwnagotchi.local.

Why can't I use bettercap's web UI while my Pwnagotchi is eating handshakes? This is because when Pwnagotchi is running in AUTO or AI modes, it is basically instrumenting bettercap in order to sniff packets and capture and record handshakes. You and Pwnagotchi cannot BOTH use bettercap at the same time; for this reason, it is only when your Pwnagotchi isn't hunting for handshakes to eat—AKA, when it is in MANUAL mode—that you are free to use bettercap (and its web UI) yourself.

You can use the scripts/backup.sh script to backup the important files of your unit.

The recommended update procedure is to backup your Pwnagotchi as explained in the previous section, flash the SD card with the new image and restore the backup by extracting the files back in the root filesystem.

Putting this into your .bashrc will create the pwnlog alias which is a pretty and uncluttered view on the pwnagotchi logs.

Putting this into your .bashrc will create the pwnver alias, useful for printing the version of Pwnagotchi currently running.

Pwnagotchi goes blind and detects no APs on any channel

Every once in a while, nexmon dies with: